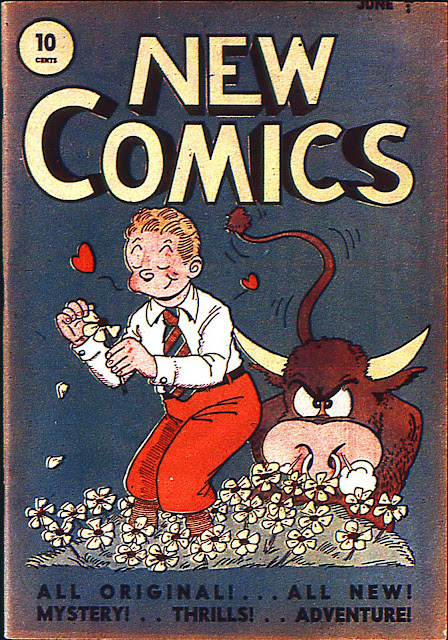 The art of Whitney Ellsworth makes its first cover appearance with issue five here of NEW COMICS and yes, it's yet another silly but well-designed gag cover. We're still a ways away from the selling point being adventure!

This issue's editorial acknowledges the winds of change, though, as the editors attempt to come up with just the right mix of what the readers of the day want. 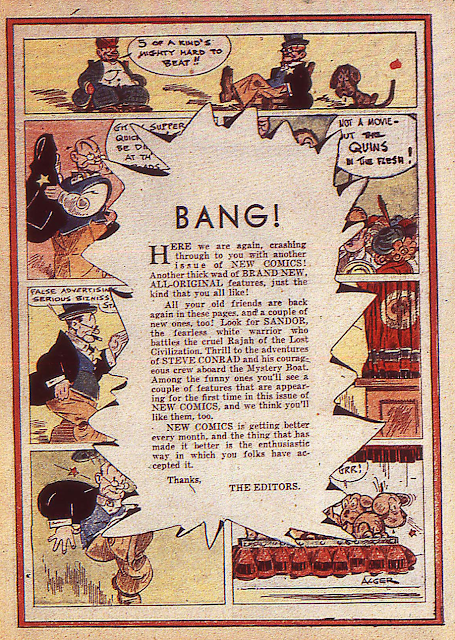 The first thing one notices is that SIR LOIN OF BEEF is now drawn rather childishly and credits two folks, J. Muselli and Bill Patrick, in place of the talented Robert Leffingwell. They also take over SAGEBRUSH 'N' CACTUS elsewhere in the issue with the same results and Patrick replaces Leffingwell on IT'S A DERN LIE on the last page, too.

SANDOR AND THE LOST CIVILIZATION is a brand new strip by Homer Fleming, yet another derivative of Hal Foster's TARZAN storytelling only this one's pretty good. Unlike Tarzan, Sandor is a white man raised by a pack of wild dogs. In other words, he's a real son of a....MOVing on... 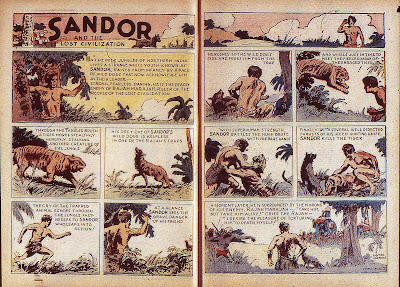 Alger's SAM THE PORTER is a nicely drawn humor strip but unfortunately features some of the most negative stereotypes yet both in illustration and substance.

FUNNY MAN, an 8 (!!) page text story by Paul Frederick about a cartoonist and the women of various ages who figure in his life, follows.

Another new feature, RATTLESNAKE PETE, is credited to R. Donrog. Obviously an anagram, GCD says it belongs to Gordon Rogers. Gordon Rogers had been a newspaper cartoonist and apparently didn't want folks to know he was slumming in comic books. He would eventually become known by his nickname, "BOODY" Rogers, under which his brilliant creation, SPARKY WATTS would appear in both newspapers AND comic books! A couple of years ago, Craig Yoe published a collection of some of Boody Rogers' best material. Boody returns later in this issue as "Rogers"with a proto-FLINTSTONES strip entitled ROCK-AGE ROY. 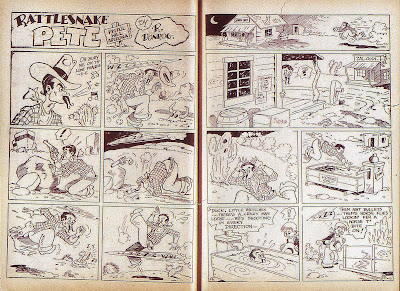 Wow. Check the artsy adaptations of the legend of Pandora's Box and Prometheus! GCD makes a guess--and I can see it--that this unsigned work is by H.C. Kiefer whose work had, of course, appeared in the prior issues. 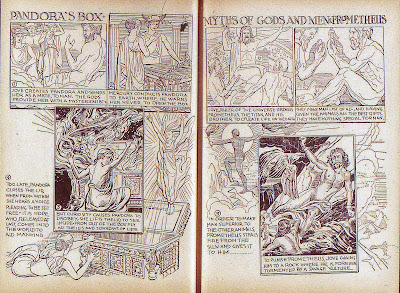 Creig Flessel makes his NEW COMICS debut with the B&W STEVE CONRAD feature. Flessel would become a fixture at National for ages, particularly on SANDMAN. After a long and distinguished career in art survived long enough to be rediscovered and feted at Comic Book Cons well into the new century!

Part two of the practically anachronistic STRATOSPHERE SPECIAL comes next.

Broadcaster and newsman Lowell Thomas is profiled in the radio column this month. Thomas would still be broadcasting fifty years later. William Powell, stuntmen and the unreleased at the time ANTHONY ADVERSE get written up in the movie column.

After the monthly magic tricks page, Kiefer's back, signed this time, with an ornate three page illustrated poem.

RAY AND GAIL are back, too, after a single issue absence, and their color is back, too. In fact, their strip has a bit of action here and looks better than it had to date. 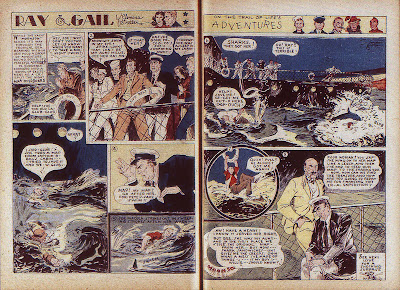 This month, if you're keeping track, Dale Daring is rescued from the fix we left her in last month in spite of a big fire. BUT...we still don't learn who she is or why she got mixed up in all of the mess she's in in the first place.

FEDERAL MEN announces the JUNIOR FEDERAL MEN CLUB, one of many such clubs from the early days of comics basically designed to promote reader loyalty and see just how many people are out there.

At the end of this issue is the regular indicia. Interesting, though, to note that subscriptions were cheaper in the US, South America, Mexico...and Spain. Spain? Why Spain? Why did Canada have to pay a buck fifty more than Spain? Why did Spain get the cheap rate when, in order to get it there, it had to pass through various other European countries who had to pay MORE! Who knows? Wonder if they ever actually had any subscribers from Spain. 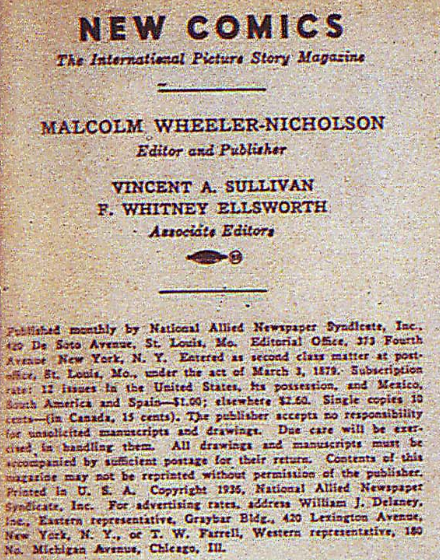