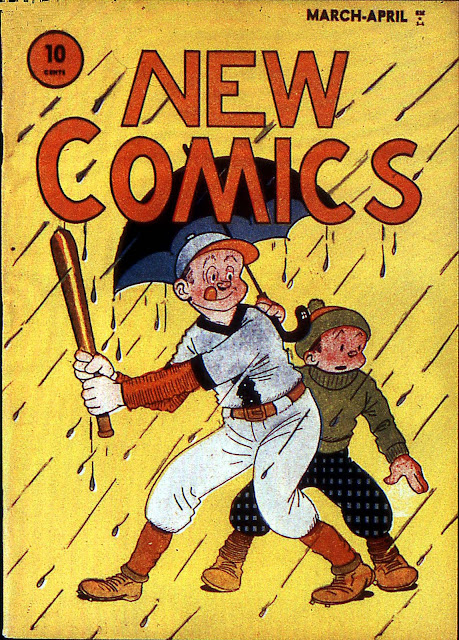 I don't know about anyone else but I'm loving these quaint gag covers. They aren't so much funny as they are just very well designed. There are a lot of new strips in this issue replacing some of the old ones. One wonders if they got a lot of mail either pro or con or just decided to shake things up a bit. Some of their mail is actually printed in this issue in what was certainly one of the very first comics letters columns. 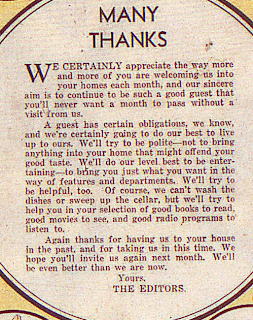 Issue 4, which appears to now be bi-monthly, opens with an inside front cover ad for the latest issue of MORE FUN COMICS, the contents of which at this stage were almost a twin to NEW. (It would be advertised on the inside back cover also, described as "a thick wad of hilarity, thrills, mystery, adventure") This issue's editorial promises  that offensive items won't be found in this or any other issues. (That, of course, would change.) 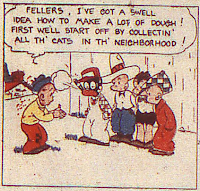 The first strip this time 'round is INCH, yet another of the virtually interchangeable kid strips similar in tone and art-style to SMITTY, SKIPPY and a host of other then-popular ones. It would be his only appearance. Interesting to note the African-American kid, stereotype though he may be, is shown consistently smoking a cigar! This strip is credited to one Deanie Patrick, about whom I could find absolutely nothing. 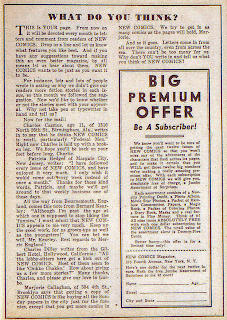 An artist making his first appearance here is Hal Sherman with two strips, G. WIZ and CHUBBY. Sherman had been and would later be again a gag cartoonist but his main contribution to comics would probably be his co-creation, as the original artist with writer Jerry Siegel, of THE STAR-SPANGLED KID and STRIPESY. 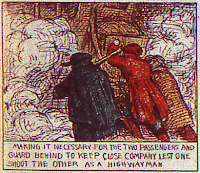 An adaptation of Dickens' A TALE OF TWO CITIES follows, apparently written and drawn both by Merna Gamble, an early female comics creator. The art here is unusual and very crosshatch heavy but fascinating. See sample.

Stan Randall's RAMBLIN' JIM is yet another new strip this issue as well as being yet another kid strip. You have to realize just how many of those there were in the nation's newspapers in those days!

17-20 ON THE BLACK continues to look much better in color.

OL' OZ BOP by "Alger" is also new here. The artist, according to GCD, was actually one Russell Cole. As Alger, he was a fixture in the early National comics. His GOOFO THE GREAT would appear later in this very issue. 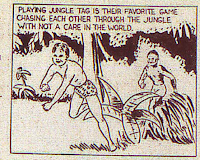 SLIM AND TEX, a new black and white cowboy strip that seems to have had very little effort put into it, is followed by the similarly poor CAPTAIN JIM OF THE TEXAS RANGERS. Well, actually, in between was the HELLO KITTY of its day, that sugary, uber-cute little kid strip, SARA LOU SUNSHINE. 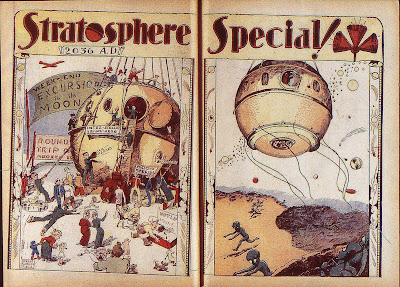 STRATOSPHERE SPECIAL, seen here, is curiously old-fashioned both in subject and art. It's credited to one Serene Summerfield, about who you can read more than you'd likely ever really want to know at THE COMICS DETECTIVE.

Al Stahl's NEEDLES is back bit shorn of color it looks naked and unfinished. Unlike some strips, NEEDLES just seemed to need that extra boost. 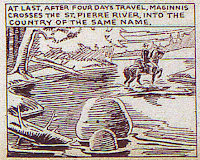 Also in black and white, we have MAGINNIS OF THE MOUNTIES. The Royal Canadian Mounted Police was another subject that was enormously popular on those days in movies, radio and other comic strips. In fact, residual popularity carried over well into the sixties and led to the creation of DUDLEY DO-RIGHT. This strip, credited to J.C. Leonard, has almost a woodcut look. 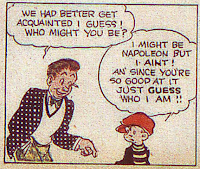 Signed by Dick Ryan, BUGVILLE is a black and white two page spread of scores of anthropomorphic insect gags similar in style to the type of thing that Sergio Aragones would make his own decades later.

This issue's film review pages promote B westerns and Charlie Chan films. This issue's radio watch namechecks WSAI out of Cincinnati, my personal favorite radio station when I was growing up! 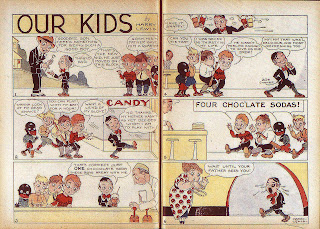 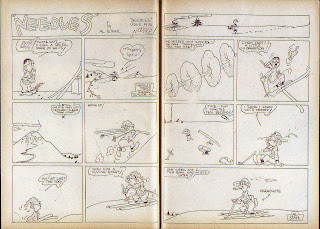 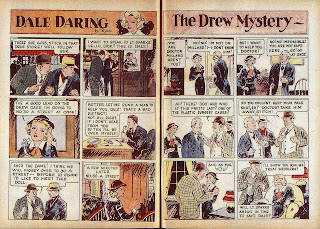 OUR KIDS by Harry Lewis is an oddly drawn new strip--and yes, it's another kid strip and yes it also has a black stereotype character. Both Sheldon Mayer's J. WORTHINGTON BLIMP and Siegel and Shuster's FEDERAL MEN make return appearances right at the end along with DALE DARING by "Ryan." Who is Dale Daring? Who knows? It's an attractive  strip but in its two pages it doesn't tell us if she's a cop, a reporter or just a nosy blonde dame.

A lot of changes this issue. Gone were several nicely drawn strips such as RAY AND GAIL, DICKIE DUCK and PETER AND HO-LAH-AN to be replaced with a lot more strips in black and white.
Posted by Booksteve at 12:04 AM