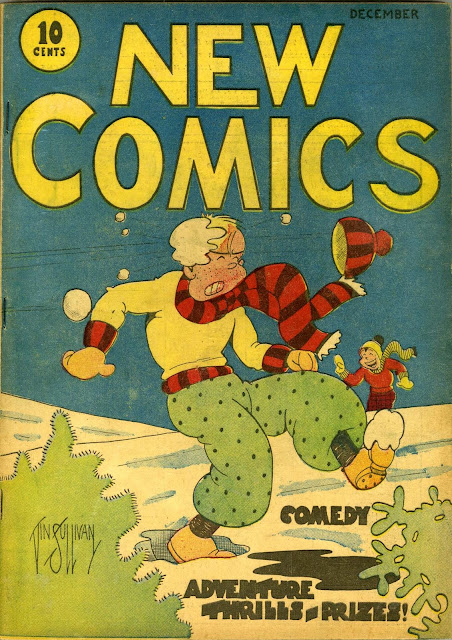 Comic books were still very much a new thing in the mid-thirties so one has to assume that kids didn’t exactly haunt the newsstands and drugstores of America for them yet. For those lucky few who found or had purchased for them a ten cent copy of the first issue of NEW COMICS in either September or October of 1935 (as  periodicals then and now are dated a month or two early), it had to have seemed the absolute coolest thing ever.
What few comic books there were consisted mostly of reprints of newspaper strips. Major Malcolm Wheeler-Nicholson’s National Allied Publications was determined to change that. The company had already published a tabloid magazine of all new features earlier in the year but NEW COMICS, with a gag cover by its future editor Vin Sullivan, was their first book that would be recognizable to us today as a comic book.
The book that would eventually become ADVENTURE COMICS started out as a mixture of every kind of feature imaginable, offered mostly in brief, serialized spurts. Most readers are probably familiar with the obtuse postal regulation that required at least two text pages in a comic book in order for it to be allowed second class mailing privileges (and believe me, that was a huge money-saver!). I’m not sure if that was already in force at this point but NEW actually embraces the concept of text features, presenting a number of both fiction and non-fiction pages throughout the early issues.

An introduction from “the Editors” shows a bit of precognition when it states that the reader could expect, “…comic characters of every hue, knights and Vikings of ancient days, adventuring heroes, detectives, aviator daredevils of today and hero SUPERMEN of days to come!” This was two and a half years before Superman would make his debut in the premiere issue of ACTION COMICS.
Anyone with more than a passing knowledge of Golden Age comics realizes that in spite of those artists we remember who were above average at the time, for the most part comic book art of the period simply really wasn’t that good. Comic book artists tended to be frowned on as low talent or no talent also-rans by the same folks who in those days elevated newspaper strip artists to national celebrities. In the beginning here, though, it is very clear that some effort was being put into this magazine.
The art is good throughout and, in some cases, just stunning. Much of it is done as cartooning whilst other bits are more traditional children’s book style illustration. Many of the creators represented here in this first issue would go on to bigger and better things in the field.
Let’s take a look at what we have:
To start with, NOW… WHEN I WAS A BOY by “Leo” is a very traditional newspaper style strip told in two pages.

SIR LOIN OF BEEF is more of the same with a medieval setting and is by R. G. (Robert) Leffingwell. Leffingwell would later take over the art chores on his brothers LITTLE ORPHAN ANNIE-inspired strip, LITTLE JOE and, many years on, even take over LITTLE ORPHAN ANNIE itself briefly. He was prolific in these early issues. There’s a tacked on, tiny four-panel strip called AXEL that may also be by him.
Whitney Ellsworth provides some fun art on the next Sunday-style comic strip, BILLY THE KID, about a young boy getting into trouble. Ellsworth would later become a major force at the company and, in the fifties, producer of THE ADVENTURES OF SUPERMAN on television.
Leffingwell is up again already with SAGEBRUSH ‘N’ CACTUS, a silly cowboy feature that would last awhile. This time the bottom strip, FANNY, about a mule, is signed by him.
THE VIKINGS is the first actual adventure strip in what will become ADVENTURE COMICS. Told in the style of PRINCE VALIANT, it offers some very impressive illustrative art by one R.H. Livingstone. 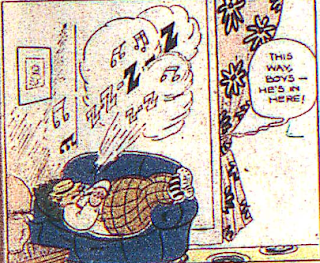 Sheldon Mayer’s J. WORTHINGTON BLIMP appears next. The character, as his name suggests, was most likely inspired by THIMBLE THEATRE’s J. Wellington Wimpy who was by all accounts giving Popeye a run for his money in the popularity department during that period. Mayer would go on to be M.C. Gaines’ sidekick and assistant editor as well an immensely talented cartoonist himself. Among his creations would be SCRIBBLY, SUGAR AND SPIKE and the one that would bring him back to the pages of ADVENTURE some 40 years on, THE BLACK ORCHID.
The next strip, the old-fashioned looking THE TINKER TWINS AT PENN POINT, appears in black and white. It was a peculiarity of most early comic books that some pages were in black and white or, in other cases, two toned. It’s credited to Joe Archibald whose name is also on the dense, four page text story western that follows.
Some ad pages and three non-fiction text pages follow before we end up back at comics with Al Stahl’s NEEDLES. Stahl would be a regular contributor of short comedic features throughout the Golden Age for several companies. 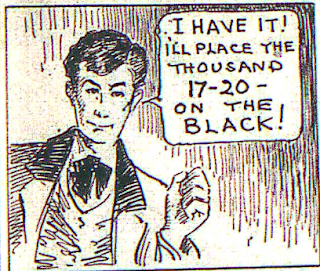 A page of unfunny single panel cartoons (signed by “Bo Brown”) is followed by another black and white strip, this one the ambitious-looking 17-20 IN THE BLACK, notable as the first appearance of Asian stereotypes in the book. They’ll turn up often throughout the early years. The strip, whose star Jim Gale, would continue on here for some issues to come, is credited to one “Billy Weston” and yet signed “Tom Cooper.” The sketchy art is very stylized.
JUST SUPPOSE is given a RIPLEY’S BELIEVE IT OR NOT style treatment by H.C. Kiefer who would go on to a quite notable career in comics.
A “How to draw cartoons” page and a puzzle page are followed by two black and white pages of CHIKKO CHAKKO, a Mexican stereotyped character by Ellis Edwards.

The following two pages, however, are a real treat---a couple of scenes from Jonathan Swift’s GULLIVER’S TRAVELS illustrated rather ornately by, of all people, Walt Kelly, who would go on to fame and fortune as the creator of POGO in the decades that follow.
More black and white strips follow—first a SKIPPY style strip called FREDDIE BELL (HE MEANS WELL) and then a “Junior Section—For Younger Folks” with a cutesy strip called SISTER AND BROTHER and then two pages of paper dolls to cut out. 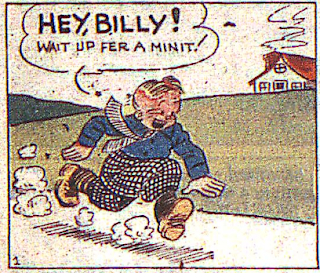 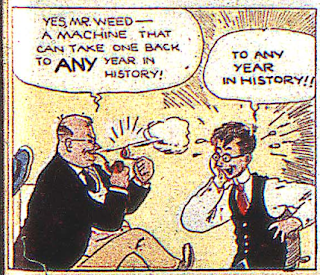 Another text section follows with an article on Stamp Collecting, two pages on other hobbies, a section on movies, book reviews and sports! They really did go out of their way to make this an all-round solid collection of material.
And it wasn’t through yet!
John Elby’s CAPTAIN QUICK is a rather sparsely drawn adventure strip, also in black and white. GCD says Elby was actually Jon Blummer who would stick around National well into the superhero era.
Vin Sullivan’s JIBBY JONES and Sheldon Mayer’s THE STRANGE ADVENTURES OF MR. WEED follow. Again, both men would be major players in the comics field for years. The latter strip looks promising as it’s about a nerdy historian who meets a scientist with a time machine.

RAY AND GAIL is a late Depression-era soap opera style strip with realistic art credited to one Clem Gretter.
ALLAN DE BEAUFORT is yet another poorly drawn take on PRINCE VALIANT in both style and content. It gets four pages but no artist is credited. (Smart man!) 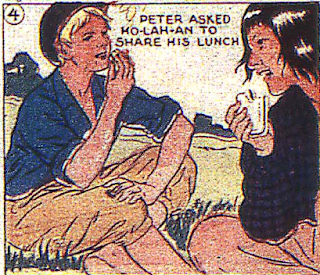 DICKIE DUCK sees the return of cartoonist Matt Curzon. Then it’s PETER AND HO-LAH-AN (pronounced??), drawn in a lovely children’s book style by “Liv.”
Then, at long last, we reach the end of this treasure trove of comics where Leffingwell returns yet again with IT’S A DERN LIE, a THEY’LL DO IT EVERY TIME feature that solicits readers to send in ideas as that strip also did.
The back cover advertises THE number one toy of its day, the official Shirley Temple doll! 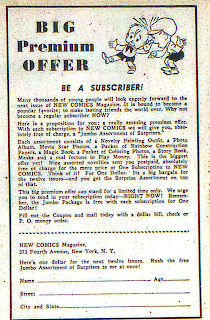 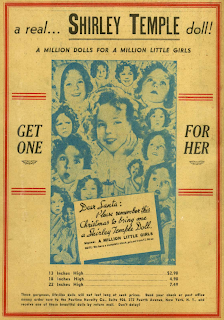 So…wow! This single first issue of NEW COMICS would have taken ages for a kid to read, sprawled on the grass outside or sitting on the steps of his apartment house or in his treehouse or under the covers with a flashlight. And best of all, there was an ad for subscriptions! There were going to be MORE of these comic books! In the long run a LOT more! Next: NEW COMICS issue two!
Posted by Booksteve at 4:34 PM