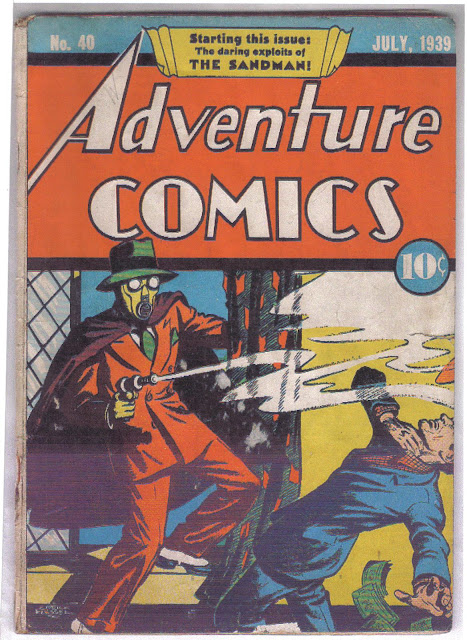 Flessel returns to the covers of ADVENTURE with the readers' very first view of THE SANDMAN in this seminal issue of the series. 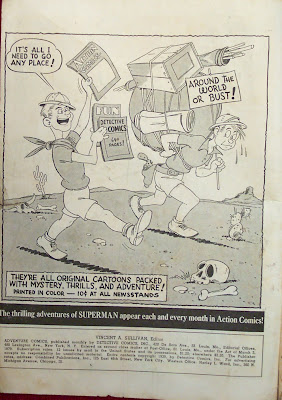 THE SANDMAN undoubtedly came about in much the way THE BATMAN did a couple of months earlier. On the one hand it was a seeming response to the success of SUPERMAN but on the other it kept its feet securely in the pulp arena. The importance of the strip in this particular venue is that it opened up the floodgates for more masked and super-powered heroes soon to come. 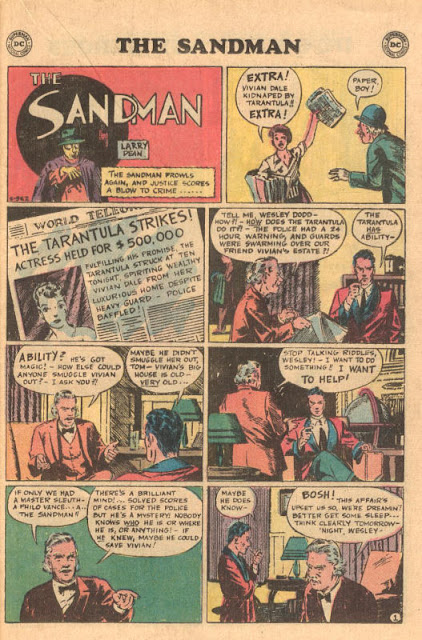 Reprinted here is that first SANDMAN story only not from this issue. The scans weren't as good as the 1971 reprint that ran in the back of JUSICE LEAGUE OF AMERICA so we're running the story from there. A side-by-side comparison shows no changes whatsoever were made by the Comics Code and the only differences from the original are in the coloring...and that's mostly on the backgrounds. Yes, that orange suit--as seen on the cover--really was the original color! 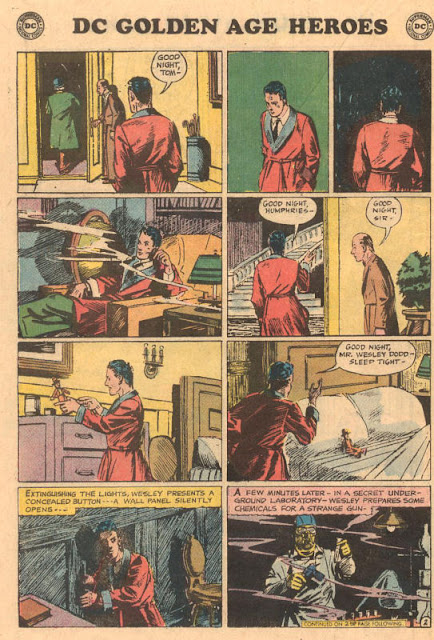 The plot is credited to Gardner Fox. Fox had already appeared a number of times in ADVENTURE anonymously as writers rarely received credit in those days. The public perception seemed to be that a cartoonist sat down to a blank page and literally wrote, drew, inked and lettered each page himself. In actuality, many of the superstar newspaper strip cartoonists farmed it all out once they became famous, preferring the golf course to the drawing board. In this particular case, Fox revealed that the artist had, in fact, scripted from his plot. Gardner Fox would continue in comic books for the next 35 years or so becoming one of the most prolific and important artists in the medium. 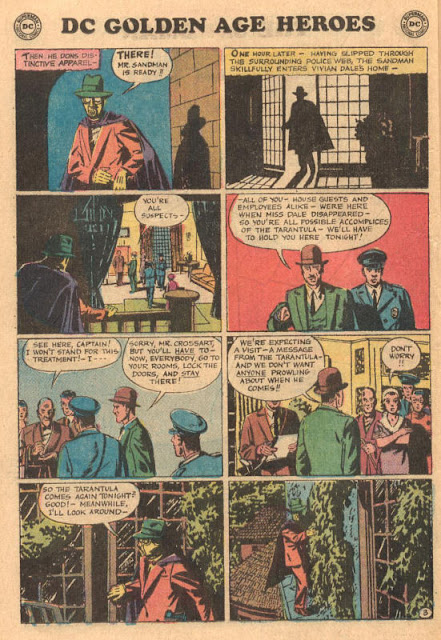 Bert Christman is the artist, signing as the pseudonymous "Larry Dean." Christman had been the artist on the influential SCORCHY SMITH newspaper strip earlier in the decade, following John Terry and Noel Sickles. He was an early volunteer as war loomed and was later killed in action in 1942. 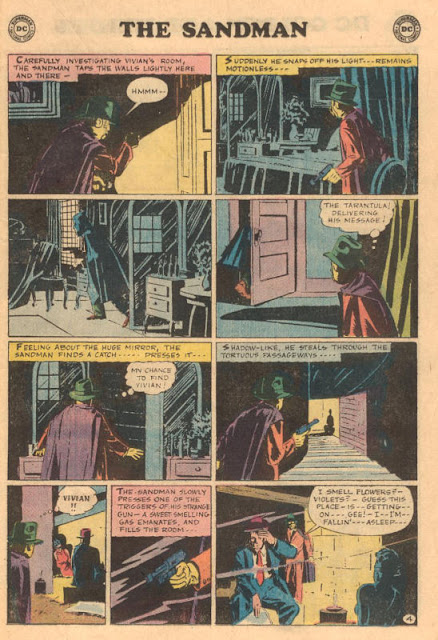 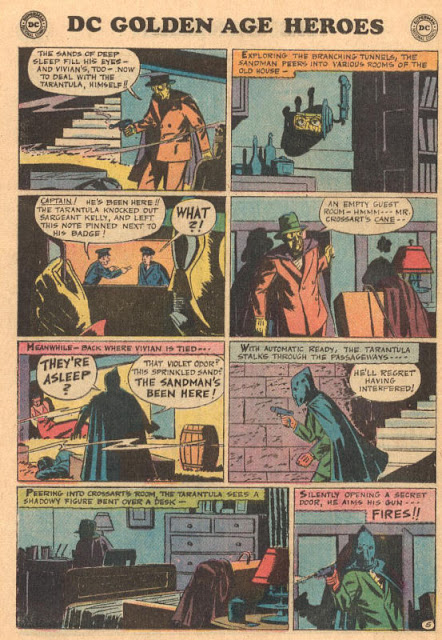 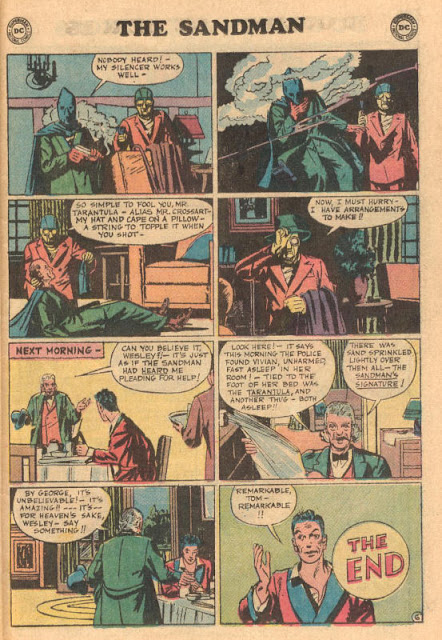 There you have it the first SANDMAN story. Or is it? The prevailing info seems to indicate that it was the first written and drawn but that another SANDMAN story by the same team (see splash panel below) appeared on the stands weeks earlier in DC's one-shot (that became a two-shot) NEW YORK WORLD'S FAIR COMICS, an anthology combining stories of most of the company's most popular characters to that point.

The character would continue to appear in this incarnation for a few years and be included in the legendary JUSTICE SOCIETY OF AMERICA, the first "superhero group." The later costumed superhero version, along with sidekick Sandy, would have a long and popular run with the majority of their adventures done by the team of Joe Simon and Jack Kirby. Revived in the sixties and then in an all-new version in the seventies, writer Neil Gaiman would cleverly tie-in and tie-up the mythos and go a whole different direction in the creation of his award-winnning SANDMAN series of the nineties.
Sheldon Moldoff would become well-known for the obvious use of photo-refernce in his HAWKMAN and BLACK PIRATE strips. Clearly he had perfected same in his various sports and movie-related one-pagers in the DC titles. 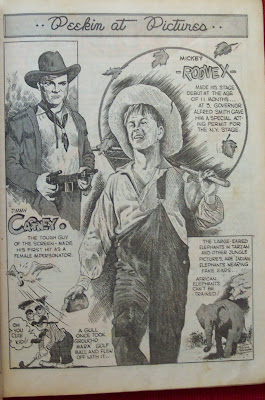 Eclipsed by SANDMAN were a couple of other new strips, done up in the 3 color format. SOCKO STRONG by Joseph Sulman (signing it as "Koppy") was a JOE PALOOKA ripoff so obvious that it was even ripping off that strip's most famous ghost artist, Al Capp, for its style. 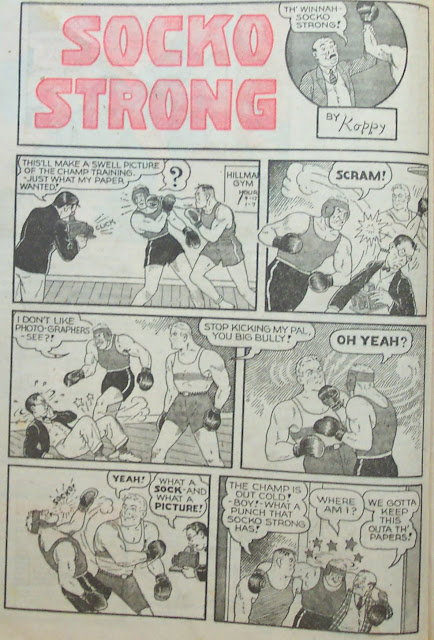 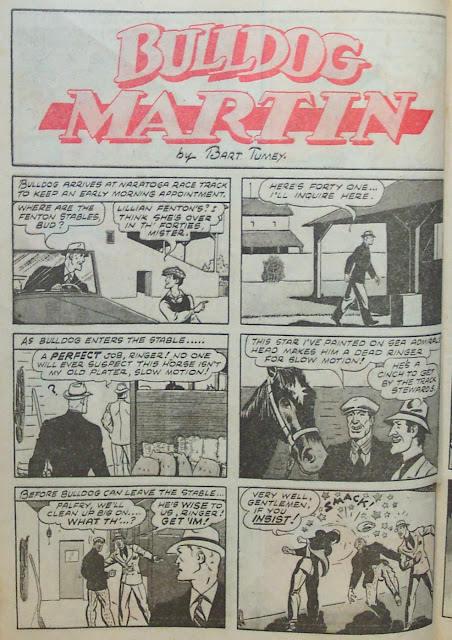 Little by little over the next few months, changes would start taking place. Big changes. Adventurous changes!
Posted by Booksteve at 12:09 AM